The district has 3364 villages and there are three rivers in the district viz. Ganga, Gomti and Karmnara. The net sown area is 2.54 lakh ha with the cropping intensity of 161.45%. Including the seasons of kharif, rabi and zaid, a total area of 4.36 lakh ha is put under various crops such as wheat, rice, pulses, sugarcane and oilseeds, potato, vegetables, onion, tomato, chilli and banana etc. The district has a large number of cold storages spread in five blocks of the district that provide easy access to farmers for storing potato. 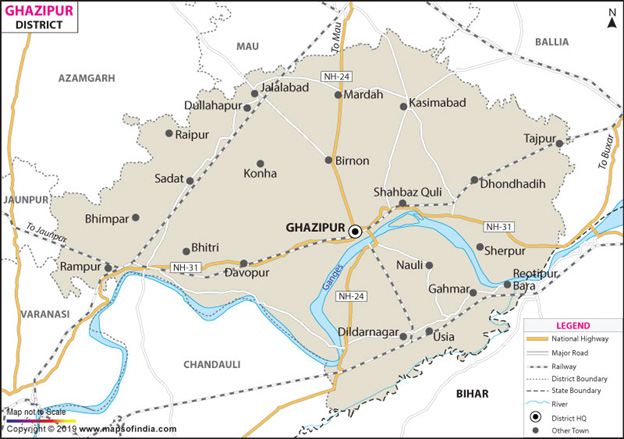 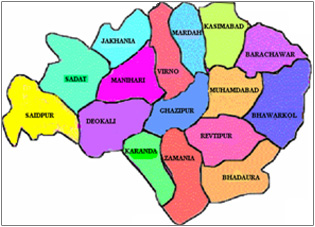 
Agricultural Land in Use

This situation is in western south part of district including Saidpur, Sadar, Karanda, Manihari and Deokali having only 29.28% of geographical area.

This situation is observed in the northern part of district including Sadat, Jakhania, Birno, Mardah and Kasimabad block having only 29.99% of geographical area.

This situation is spread over Zamania, Rewatipur, Mohammadabad, Barachawar, Bhawarkol and Bhadaura blick situated in eastern part of the district. The soils in this situation are predominantly low land. Major area of Karail is under Massor, Gram and vegetables.


Details of Soil of the District

(i) Plain alluvial, very deep soil having 0-1% slope, loam to silt loam soiltexture slightly eroded soil: This situation is in the western-south part of the district including Saidpur, Sadar, Karanda, Manihari and Deokali having only 29.28% of the geographical area. The details of this situation are described under agroclimatic zones.

(ii) Plain alluvial, slightly saline and alkali loam to silt loam, 0.1% slightly eroded soil and imperfectly drained soil because calciumcarbonate ‘Kankar’ pan: This situation is observed in the northern part of district including Sadat, Jakhania, Birno, Mardah and Kasimabad block having only 29.99% of geographical area.

(iii) Karail Soil: This situation is spread Zamania, Rewatipur, Mohammadabad, Barachawar and Bhadaura block situated in eastern part of the district. The soil in this situation are predominated low land, major area of Karail is under lentil, gram and vegetables.


Soil of Agro-ecological situation with representative blocks of district

Land Use Pattern of the Ghazipur

92 per cent of the land holdings are dominated by small and marginal farmers.

However, the soils in Ghazipur, Jaunpur, Varanasi, Deorai and Gorakhpur districts rated low in organic matter, low in available nitrogen, low in available phosphorus and medium in potassium, low in Zn status with the increasing population pressure on agriculture has been increased tremendously. To increase production more and more chemical fertilizer, chemical pesticides were used that adversely affected not only environment but the soil health also. In Ghazipur district 214207ha land is under irrigation, normally is common areas farmers preferred rice cultivation continuously same land. The soil analysis report of the samples analyzed by the district soil survey and soil testing laboratory Ghazipur indicated more than 70% samples are deficient in organic carbon and 80% of samples are deficient in phosphrous. On the basis of samples analyzed during the year 2008-13 indicated 99% of the soil samples ranges between pH 6.5-8.5 and electrical conductivity of 95%. Sample ranges 0-1 improvement in soil health through exclusion of green manure, legume crops, vermi-compost, compost, farm yard manure, bio-fertlizer and crop rotation, soil type clay loam, sandy loam, diera soil (silt), black soil (Karail region). Agricultural innovation partnership the continuity of paddy-wheat crop rotation and including pulses to improve soil health through nitrogen fixation. Chronic arsen poisoing can cause serious health problem in animal including human such as soil and water samples taken from eastern district of Ballia and Ghazipur of Uttar Pradesh.

Soil health is a state of soil meeting its range of ecosystem function a appropriate to its environment. Soil is the foundation of any farming system. Having healthy soil in essential for growing healthy crops and feeding a healthy diet to livestock and people, Soil health is the condition of soil in a defined space and at a defined scale relative to a described bench mark. The definition of soil health may vary between users of the term as alternative users may place different priorities upon the multiple function of a soil. Therefore, the term soil health can only be understood within the context of the use of term and their aspirations of soil as well as by the boundary definition of the soil at issue.


Information of Problem Soils in the District


Information of Soils of the District